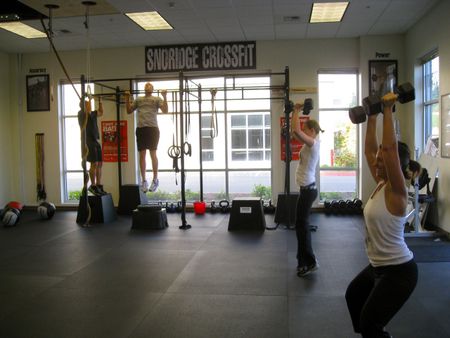 You came back! For those who survived the Filthy Fifty and came in today this was a short intense push-pull WOD that worked on upper body strength while forcing push-jerks. Pat, Jeremy and Nan all decided to just get “Filthy” and go for it since they missed the chance yesterday.

Nutrition “chat” Saturday at 11am (after the 10am WOD). Bring your logs of what you have been eating. The Saturday workout will be fun and focused on setting some of your own PR’s in several “events”. Call it “Max Effort Day”.

Have rope will climb. Tiffany was up for it. Literally! 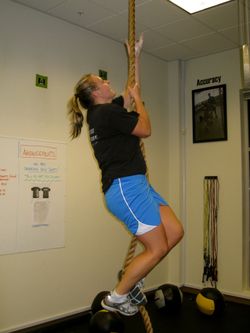 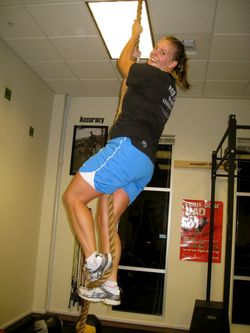 Today’s post is a before and after example about one person’s journey towards elite fitness. This is a story of how effective CrossFit is. That the proof is in the pudding (even though we shouldn’t eat any of that stuff)! A really good friend of ours (Gregg) gave us permission to share his story because I asked. You may have seen him comment on our blog or post on beyondthewhiteboard.

Gregg is a CrossFitter. He has achieved what I would call elite fitness. He is not a specialist, he is a generalist. He is more than fit enough to tackle most things that if you threw a bunch of activities into a hat and drew out a handful he would outperform most others. He has been exclusively doing CrossFit since December of last year at an affiliate and then solely in his garage gym since April of this year. Prior to that he had trained off and on either at a globo gym or on his own. He also has in the past two months drastically altered his diet to follow a Paleo diet. Is the diet purely strict? No, but it’s pretty darn close. What Gregg adopted was CrossFit, intensity, and real change in his eating habits. What he has realized is powerful evidence of what happens with doing it consistently, putting in hard work and having fun. This example shows that CrossFit is evidence based fitness.

Here’s his before pics: 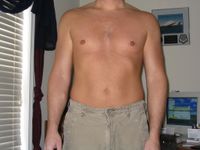 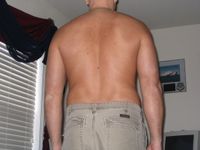 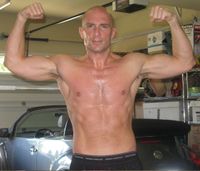 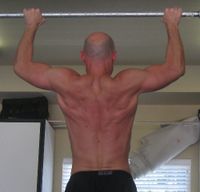 This is an example of what many of us (me included) have experienced at some point in our lives. You want to get “in shape”. You used to be athletic or “fit”. You know you need to get started so you a) join a gym, b) buy an exercise magazine, c) follow a program or cycle that you used to do or is spelled out for you d) learn new exercises as you go or emulate from what others in the gym are doing too. What you forget is most of those people in the gym are in the same scenario as you. Thus begins the cycle: you stick with it for awhile, make some progress, hit a high point, grow bored or busy, put it off, and get back to the starting point. Along the way you may get injured, or heavier, or eat terribly, and so on. That all changed for Gregg when he found CrossFit, started paleo and lost 30 pounds lost in 8 months…
Here’s Gregg’s story in his own words:

END_OF_DOCUMENT_TOKEN_TO_BE_REPLACED

Pose Method: Defined on posetech.com as efficient, injury-free movement taught through poses. Use this technique to prevent injury and to dramatically improve athletic performance.
I have taken a Pose Running seminar before by Michael Collins. It drastically helped illustrate the effect of “heel striking” while you run and the toll it takes on the body. It also helped point out that the majority of running shoes on the market promote heel striking. Heck look at most running magazine pictures and they almost always are about to land heel way out front ahead of the body. Why is this important? What does this have to do with CrossFit?
In CrossFit we emphasize efficient movement that generates the most power. We want to produce as much work in as little time but do it so that we are leveraging technique, form, and intensity for greater output. If every time we take off on a 400m, 800m or longer run we strike the ground with our front foot in a position that acts as a “brake” on our body we are being inefficient. We are fighting our own momentum and potentially going to cause injury.

Pose method running is a technique that emphasizes a few key points.
Think of it as “falling forward” and taking advantage of gravity. Each foot lands under the hip and the steps are short and quick. Don’t land on your toes, land on the ball of your foot. Arms are tight and shoulders are loose. “Pose” as if you are in a controlled fall. When you run think of “pulling” your foot off the ground each time, not “pushing” your foot and body forward. Read more about Pose technique on the CrossFit Journal.
Ever notice when you run barefoot you really have no choice but to use this method? Give it a shot each time you run. We may also incorporate some drills into our movement prep. It will take some getting used to but it will make you a more efficient runner.
Typical running magazine photo on the left, Pose running on the right: 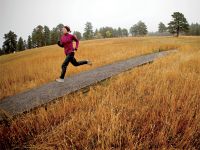 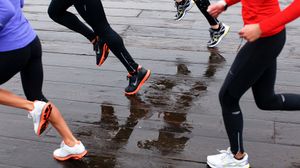 Nike Running Camp: If CrossFit makes this their running cert would you go?

is a common saying in CrossFit. It applies universally to any CF box. The moment you walk through that door, leave the ego behind. Those of us who CrossFit, get it. You cannot come in day after day and have an ego. You won’t last. If you fear getting beat by someone who is older, younger, heavier, skinnier, male or female, you will not stick with this. Because simply put you will get beat. Often. It’s not about who you “lose” to. It’s also not about who you “beat”. The only person you are really competing against in here is yourself.

Everyday we battle that inner voice, the one that tells you to take a break, drop the bar, slow down, quit or stop. The one that says “I can skip today because work was long, I had a bad day, I didn’t get enough sleep, I have too much to do”. During each WOD, you have enough to focus on rather than taking the time to worry about those around you. Is it fun to chase someone else or to win the day on the whiteboard? Sure it is. The bigger fun is seeing the results, setting a new PR, and doing things we never thought we could or would. That is what we really take pride in.
I got an email from one of our clients (Jim) the other day that really was great to read. The topic was “CrossFit doesn’t get easier”. Jim went on to say the following:

“First of all, I just broke my recent personal best by more than 2 minutes in the 2 mile tonight. I ran 2 miles about 2 days before my 1st CrossFit lesson in May. So in 2 months, I have reduced my mile split by 1 full minute.

But here is what I was thinking when I was running. Before, when I ran, I feared the pain. I ran just to increase the heart rate and get a small burn.  When I was finishing the run in the past, I was just barely crossing the “finish line”.  Now after CF, pain has a whole new meaning. My pain threshold is much higher now. At the end, I sprinted to beat the clock…missed it by a second.

The thing that I find interesting is comparing CF to past lifting I did and sports I played. What I have to get used to the most is losing, it sucks. I have never been beaten physically like this regarding sports. You got me thinking last night after the WOD. If you remember, I made the comment “damn Tom when does this get easy?”. You replied, “this is CrossFit…it doesn’t get easy.”

But that is contrary to every workout I have ever done before, as they progressively became easier as I did more reps. So I have to rethink my approach to working out a little. And what I have thought is that this won’t get easier as time goes on…but that is good.“

CrossFit is hard. Why? Because we always are striving to do more than yesterday. More weight, better technique, faster time, more rounds or reps, more effort. That is the pathway to becoming fitter. It never gets easier, but we get better.
This video I shot at the Games illustrates this. It shows Josh Everett tackling the deadlift WOD. Is he competing against everyone at the Games? Yes. But as you see in the video he is really competing against himself. Maybe he makes the deadlifts look easy, but he is clearly battling that inner voice, telling himself he will lift them all. And that ego? It’s checked somewhere at the door…